An update from Backboath, near Forfar

The trials at Backboath certainly haven’t tapered off, instead Hugh’s determination to compare many different methods of production is in full swing. Below is a summary of current on farm trials, including updates from the previous report and ideas for future experiments.  Below is an August update from Backboath near Forfar.

Following the slow establishment of a sub-terranean clover mix in the bottom of a crop of winter wheat, the clover has survived the season and is growing well.

This trial was in itself established within a wheat trial, where Hugh tried three establishment methods highlighted below. The more open crops of wheat, following the sub-soiler establishment has more developed clover due to better light penetration towards the ground, compared with the conventional establishment where the clover is still present, but much smaller. Winter wheat with sub-terranean clover established in the understory, established with a plough and power harrow. Clover plants beginning establish within the field of wheat.

However, the wheat with the most developed clover also has the highest weed burden. After spending a significant amount of money buying and establishing the clover, Hugh decided not to risk killing it with a herbicide, opting to allow the clover to establish well, hopefully allowing herbicides to be used in the future which will only knock back the clover but not kill it. 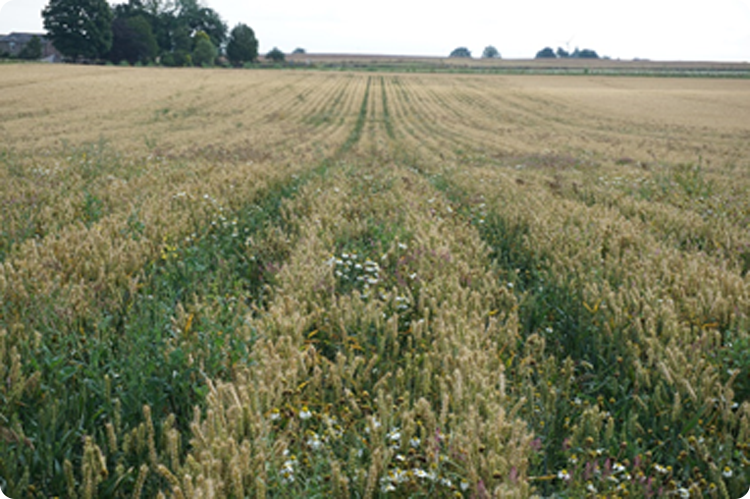 Clover was established using a subsoiler with the seed dropped behind the leg. This clover was established using a subsoiler with the seed broadcast on the surface.

Alongside the clover and establishment trial, Hugh also grazed part of the field. Earlier in the year, there was a height differentiation between the grazed section and the ungrazed section, with the grazed area being a little shorter. However, as the season progressed, the divide was only visible by a colour difference, and laterally, as shown by the photos below, there is no visible difference. Hugh plans to use his combine to yield map this field, aiming to highlight if there was a negative impact on grazing cereals throughout the winter month. This trial will also be replicated through a new Horizon 2020 project starting in October, where many replications will be grazed.

Hugh plans to graze his cereals again next year, however he hopes to introduce the sheep earlier in the year and remove them sooner. This is to provide the crop with the most time possible to regrow and to fit in with the sheep producers grazing plans. He is also planning on growing spring oats which are sown in the autumn, using the sheep as a management tool to control growth. Hugh says: “now that we know the time it takes to put up and take down fencing, we can commit to grazing the sheep for longer, possibly even getting two rotations across the whole farm”. One downside of grazing sheep on crops, found at Backboath, is the soil disturbance from the hooves. This has caused the pre emergence herbicide to be less effective and therefore the careful management of weeds is crucial. The grazed and ungrazed wheat photo taken on 13.08.2020, with no visible difference

Established with a Claydon drill, Hugh’s beans look tremendous. Hugh has decided to reduce his spring bean area for the coming season, opting to grow approximately half of the planned area with winter beans. This will give him the same total area of beans but will shorten harvest considerably. Hugh has noticed the chocolate spot move into his crop of beans within the last week, this disease will eventually kill the beans, making them ripen ready for harvest.

Hugh’s bean and OSR companion cropping trial was perhaps less effective. Following a green manure crop in 2019, Hugh decided to grow faba beans alongside his rape to reduce his nitrogen use. However, in order to prevent the beans from being killed with the pre-emergence herbicide he opted to only spray the headlands with the chemical as a trial. The beans survived the herbicide application, however the main section of the field, which was not treated has suffered from weed competition, resulting in a low yield. The photos below show the large quantity of weeds, partly due to no herbicide application and partly due to a large seed bank following the green manure crop. Hugh says: “it’s important to try new ideas, however, we have learnt that beans can withstand the pre-emergence herbicide we use on OSR and we have also learnt that we are going to make mistakes when trying to farm regeneratively”. The weeds present following the OSR harvest where no pre -emergence herbicide was used. A clearly visible line between the headland where a herbicide was used and the main body of the field where no herbicide was used. Interestingly, the beans survived the herbicide application but were later killed by successive frosts.

Hugh has also tried establishing cover crops into a standing crop. Using his 36m sprayer, Hugh mounted 3 applicators along the booms and has sown a mix including phacelia (6%), mustard (20%), oilseed radish (30%), vetch (30%) and fenugreek (14%). Hugh hopes that this will establish well, and he plans to chop the straw at harvest over the top of the growing covers to provide maximum soil protection and maintain a living root in the soil at all times. Growing cover crops in the bottom of oats.